I spent most of my weekend with over 200 middle and high school students at the World Scholar’s Cup Amman Round. It’s a fun event that has students participate in trivia and academic knowledge quizzes, a team writing competition, and a team debate competition.

There was a talent show after the competitive events and before the awards ceremony, when they gave out more medals and trophies than I ever thought was possible. You can imagine the energy was loud and high. 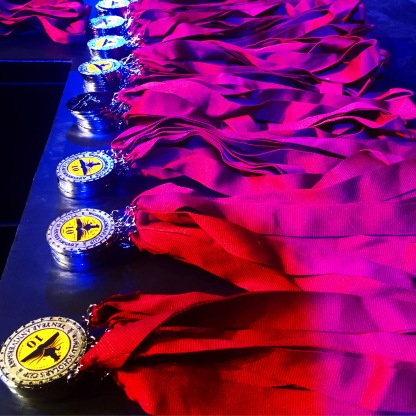 I accompanied five smarty-pants high school boys. It was a first for me and the students; I had read about it online, but had never experienced what it looks and feels like in an up-close and personal way.

I love that all of these students were so enthused about writing and debating that they spent most of their weekend (it went until 11pm on Thursday and all day Friday) competing individually and as teams.

The boys found success in different ways and in different events, and look forward to competing again. They all agreed that the team debate competition was fun and different from what they had done before, and that their anxiety level was raised just enough to keep them interested but not terrified.

So let me bring it around to teaching with the workshop model. Yes, the students were writing and debating this weekend and that’s not new or news. But the writing and the debating were especially cool because they were doing some heavy-duty thinking, and they were thinking and communicating as teams.

Here’s how the team debate works:

Students are split into teams of three. Teams are randomly assigned either the affirmative or negative side. Then they are given the motion, at which point they have 15 minutes to prepare. After the preparation is complete, each team member is given four minutes to argue his point, and the teams alternate back and forth. It’s a lovely example of respectful dialogue and persuasive speaking.

After the debate, before the winning team is announced, students are required to provide feedback to the opposing team. I love this part!

As judges, we were given scoring criteria and a script, so adjudicating was a simple task, and I was able to pay attention to what they students thought about some hypothetical situations, like whether or not Jordan should send a manned mission to Mars. With a topic like that, students had to look up some real-world information, process, synthesize, and argue their points in a very finite period of time. It was an opportunity for students to demonstrate their thinking and practice some organized speaking and listening.

I think this activity has a ton of potential, because I can modify the team debate event for classroom use, and then have a window into some complex student thinking.

I can see it used with some topics that are relevant to what students have been studying recently.

For instance, eleventh grade students can debate whether they think transcendentalism is still relevant in the 21st century. They have a depth of knowledge about the topic that they didn’t have before we started studying it together, and this would be an authentic way to assign group work while still being able to see the individual students’ skill and thought process.

Students could also debate something that they have no obvious prior knowledge about, just like during the competition this weekend, but with a topic more relevant to the reader’s workshop model. They could debate the merits of reading scripts or graphic novels, for instance, and do a mini- genre or form study.

Perhaps it could be a way to give students some agency when deciding on a whole class text. Give the teams some titles and let them convince each other through team debate.

It could be a way to organize book talks – give them a book they’ve never heard of, or one they feel passionately about, and let them debate.

It’s a way to allow students to think out loud and organize their thoughts with enough pressure to care about what they say, but low enough risk that they aren’t terrified to speak publicly.

It’s an opportunity for students to practice authentic, respectful discourse with one another. There are clear rules and guidelines they must follow, but it’s not a scripted activity.

I also think this team debate activity could be a fantastic way to go through the brainstorming and organizing process before getting to the business of writing an argumentative essay.

After they’ve processed the rebuttals and prebuttals, and the claims and counterclaims verbally, they can move their impromptu speeches into a well-developed essay. They will have gotten feedback from one another and from the other teams regarding their organization and line of thinking, and the energy from the debate will give them a starting point for writing the essay itself.

This activity can be used as a formative or a summative assessment, based on the speaking and listening common core state standards, and then lead in to an authentic writing task.

I’m convinced that the team debate has a ton of potential for use in a workshop model classroom, and I can’t wait to try it with my students.

Julie has been teaching secondary language arts for nineteen years, spending the first fifteen in rural Central Oregon, four in Amman, Jordan, and is currently in her second year teaching in Managua, Nicaragua. View all posts by adventuresinhighschoolworkshop