At the end of first semester, I asked students to write about how their reading lives had changed. We’d been doing workshop for a few months, I’d seen some growth and some good habits forming in many of them, and I really wanted them to recognize that they were better readers than they had been at the beginning of the school year.

I asked them to reflect on their reading lives, using an excerpt from Pat Conroy’s My Reading Life as mentor text. (I think this is one of the best mentor texts out there, so we have ordered enough copies for each teacher in our department as well as several for our classroom libraries. My colleagues are probably sick and tired of hearing about this book, but I feel strongly about it. It’s a great read and an amazing mentor text, all the way through.)

I gave the students this short excerpt from chapter one:

I take it as an article of faith that the novels I’ve loved will live inside me forever. Let me call on the spirit of Anna Karenina as she steps out onto the train tracks of Moscow in the last minute of her glorious and implacable life. Let me beckon Madame Bovary to issue me a cursory note of warning whenever I get suicidal or despairing as I live out a life too sad by half. If I close my eyes I can conjure up a whole country of the dead who will live for all time because writers turned them into living ﬂesh and blood. There is Jay Gatsby ﬂoating face downward in his swimming pool or Tom Robinson’s  bullet- riddled body cut down in his Alabama prison yard in To Kill a Mockingbird.

Hector can still impart lessons about honor as he rides out to face Achilles on the plains of Troy. At any time, night or day, I can conjure up the fatal love of Romeo for the raven- haired Juliet. The insufferable Casaubon dies in Middlemarch and Robert Jordan awaits his death in the mountains of Spain in For Whom the Bell Tolls. In Look Homeward, Angel, the death of Ben Gant can still make me weep, as can the death of Thomas Wolfe’s  stone- carving father in Of Time and the River. On the isle of Crete I bought Report to Greco by Nikos Kazantzakis and still see the immortal scene when the author’s father took him to a devastated garden to witness the swinging bodies of Greek patriots hanging from the branches of fruit trees. In a scene that has haunted me since I ﬁrst read it, the father lifted his son off the Cretan earth and made the boy kiss the bottom of the dead men’s feet. Though nearly gagging, the young Kazantzakis kisses dirt from the lifeless feet as the father tells him that’s what courage tastes like, that’s what free­dom tastes like.

When Isabel Archer falls in love with Gilbert Osmond in The Portrait of a Lady, I still want to signal her to the dangers inherent in this fatal choice of a husband, one whose cunning took on an attractive ﬁnish but lacked depth. She has chosen a man whose character was not only undistinguished, but also salable to the highest bidder.

To my mother, a library was a palace of desire masquer­ading in a wilderness of books. In the downtown library of Orlando, Florida, Mom pointed out a solid embank­ment of books. In serious battalions the volumes stood in strict formations,  straight- backed and squared away. They looked like unsmiling volunteers shined and ready for dress parade. “What furniture, what furniture!” she cried, admir­ing those books looking out on a street lined with palms and hibiscus.

I was eleven years old that year, and my brother Jim was an infant. Mom walked her brood of six children along the banks of Lake Eola on the way home to Livingston Street. My uncle Russ would leave his dentist’s ofﬁce at ﬁve, pick up the books my mother had checked out for her­self and her kids, and hand- deliver them on his way home to North Hyer Street. On this particular day, Mom stopped with her incurious children near an artist putting the ﬁn­ishing touches on a landscape illuminating one corner of the park surrounding the lake. She gazed at the painting with a joyful intensity as the artist painted a snow- white lily on a footprint- shaped pad as a ﬁnal, insouciant touch. Mom squealed with pleasure and the bargaining began. From the beginning, the Florida artist Jack W. Lawrence was putty in my comely mother’s hands. Flirtation was less of an art form with her than it was a means to an end, or a way of life. Jack demanded ﬁfty dollars for his masterwork and after much charming repartee between artist and customer, he let it go for ten.

That painting hangs in my writing room today. I am staring at the singular lily nesting like a dove in that ethe­real place where my mother purchased her ﬁrst work of art in 1956 in a backwater city dimpled with lakes. The next week, she checked out large art books from the library and spread them out for Carol and me and read out names seething with musicality and strangeness. A library could show you everything if you knew where to look. Jack W. Lawrence led my mother, who led her children to Giotto, the shepherd, to Michelangelo of the Sistine Chapel, to Raphael and his exquisite Madonnas. Years later, I took Mom to the Vatican Library and a tour of the Sistine Cha­pel; then we visited the tomb of Raphael at the Pantheon. As we spoke of Raphael, she remembered the book she checked out on the Renaissance in that Florida library. We remembered our chance encounter with Mr. Lawrence and our awed eyewitness to that ﬁnal, emblematic lily.

My mother hungered for art, for illumination, for some path to lead her to a shining way to call her own. She lit sig­nal ﬁres in the hills for her son to feel and follow. I tremble with gratitude as I honor her name. 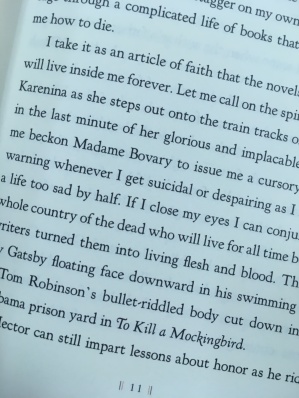 As a class, we recognized that each person’s reading life is different, but ideally more robust and enriched than it had been before we started learning and reading together.

We reflected on the books we had binged on, characters we had loathed, and titles we had dropped. We celebrated.

I could feel the energy radiating from the students as they composed their sentences and paragraphs, and as they wrote, they realized. They had changed. They had learned.

And then a minor miracle happened: Every single student in that class turned in his or her paper on time. They wanted to share the growth in their own reading lives.

Here are some example phrases from those student essays.

My idea of reading turned around and I actually like reading now and I started to not just read when assigned, but also during some of my free time.

I am reading more.

This needs time and effort, you can’t just read for a month and expect to become a better writer, it needs time. That’s why I am going to keep reading not just in my free time, but also when assigned.

I found my genre.

Read all of it without abandoning the book.

I can discover new subjects and genres that I would not have even considered reading before.

I have rediscovered the joy of reading full books.

I find myself reading much more on weekends.

Another reason I like books, they don’t tell you how your perspective on the story or characters should be.

I can develop my own opinions.

Thank you books, for being there for me, I truly appreciate it.

These students’ reading lives emerged from an organic place. They discovered something about themselves: that they like reading when they have the chance to choose their texts and pace.

While they may not be writing like Conroy (who can!?) they were inspired by him and channelled their new-found love for books in an authentic and reflective piece of writing.

Here is an NPR review and an excerpt from My Reading Life, but instead of an excerpt about the value books in his life, it’s about why he writes.

Julie has been teaching secondary language arts for nineteen years, spending the first fifteen in rural Central Oregon, four in Amman, Jordan, and is currently in her second year teaching in Managua, Nicaragua. View all posts by adventuresinhighschoolworkshop